Oceans of experience in cooling – a journey through time 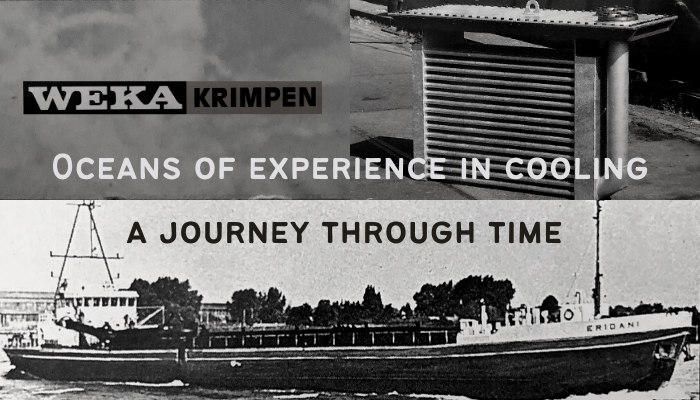 Weka Boxcoolers was founded in 1957 by mr. De Kwant & mr. Westbroek. They wanted to serve the maritime industry that sailed over the Ijssel by offering reliable on demand services. The factory it once started in was located near the river in order to be able to serve the ships quickly and effectively.

Mr De Kwant & Mr Westbroek had a strong conviction that technological developments at the time could advance maritime induction. In 1980 the first Weka Boxcoolers were installed on board a ship. This was the kick-off for a new era in providing smart cooling solutions.

During the beginning of the 21st century, Weka has improved its own products and service. Internal developments resulted in the Weka Guard and the Weka Protector. The Weka Guard helps to minimize potential damage to the units and hull from stray electrical currents and galvanic corrosion. The Weka guard, which drains away the welding currents, will be used when the ship is under construction. The Weka Protector will protect the boxcooler, while in operation, from being damaged by ICCP-systems or current originating from the sacrificial anodes. It also allows the copper-nickel to maintain its anti-fouling capabilities, protecting the tubes from marine growth. For exceptional circumstances Weka has an ultra-sonic system. This system protects the boxcooler 24/7 on low voltage, the seachest and the cooling tubes remain free from marine growth once the ship for example: Is not in operation for a long time, when the flow of the seawater in the sea-chest isn’t optimal or is operating in extreme environments.

After a fruitful partnership over a period of 25 years, Weka Boxcoolers became part of the Fernstrum group of companies in 2013. Resulting in a broad range of cooling solutions.

As a result of this merger, Weka’s product segment has grown. however, it was not yet large enough, so weka started to develop its product segment internally in order to expand its product range so that it could offer all forms of cooling solutions to its customers. these include the CuNi90/10 coolers, aluminium brass coolers, coated coolers, grid coolers and steel coolers. Ultimately, this new strategy led to a new mission and vision. In order to be able to fit in with this, Weka Boxcoolers B.V. was changed into Weka marine B.V.

With a diverse range of coolers and heat exchangers, Weka Marine delivers well-integrated cooling solutions for inland waterways and sea-going vessels. Accompanied by a range of innovative marine products that upgrade the standards of the marine industries. Contact us for more information.

Any cookies that may not be particularly necessary for the website to function and is used specifically to collect user personal data via analytics, ads, other embedded contents are termed as non-necessary cookies. It is mandatory to procure user consent prior to running these cookies on your website.