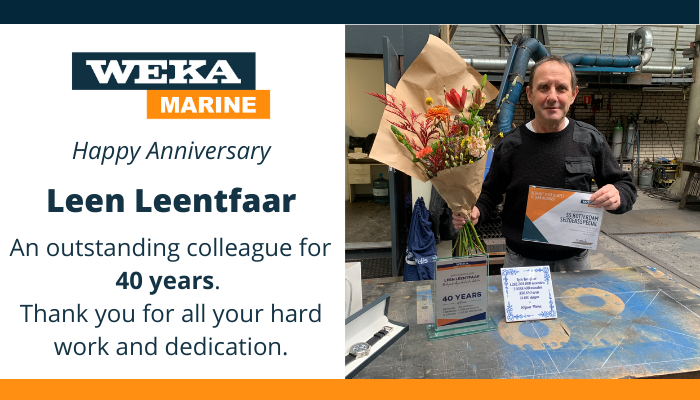 Leen Leentfaar has been working for Weka for forty years!

Leen’s family has involved with Weka since its founding in 1957. His father, who was known as Fump and one of the first employees of the Weka company.

On February 9, 1981, Leen also joined the company. Since then, Leen has held various positions within the company. His broad knowledge, experience and expertise make Leen an indispensable person within our Weka organisation.
Leen has travelled around the globe in the past 40 years. He has been away from home a lot to support our international customers, colleagues in America and other business stakeholders.

We can describe Leen as a trustworthy and helpful person who does not know the words “give up”. Even on Dutch television, Leen dares to come out and proudly say: “We never say no!”. He brings this energy and passion for working every morning.

Despite his long service, no challenge is too much for him, and he takes it with both hands.
Meanwhile, the Leentfaar family has expanded within our organisation. His daughter and son-in-law are also working in our team. Leen is part of Weka, and Weka is a part of him; therefore, Leen has a special place within our Weka organisation.

Leen, on behalf of the entire Weka marine team, our colleagues from America (Fernstrum) and our worldwide agents, we would like to thank you for these 40 years of loyal service. We hope to be able to enjoy you for several more years to come.

Any cookies that may not be particularly necessary for the website to function and is used specifically to collect user personal data via analytics, ads, other embedded contents are termed as non-necessary cookies. It is mandatory to procure user consent prior to running these cookies on your website.